How to set up Firebase Emulator for local development

This guide is for the previous version of Firebase, if you want an updated guide using the latest modular SDK v9+ you can go to the Firebase Emulator Guide

Do you know how to work locally when you’re building your app? Or are you always working against your online database?

Did you know that working locally, you can not only work faster (everything is in your machine), but also spend less money? That’s because the reads or writes to your local database don’t count against your quota, so you end up saving money 💸.

Today, we’ll go through the process of setting up the Firebase emulator in a way that you can use it for most of your app needs.

In this article, you’ll learn how to:

With that in mind, let’s get started!

The first thing we’ll do is to initialize the Firebase emulator. For that, we want to open the terminal, and navigate to our project’s root folder once we’re there, we can type:

It will prompt a setup ‘screen’ in the terminal. First, it will ask you to pick which emulators you want to use, for me, I always start with Firestore and Cloud Functions, but you can add whichever you want, depending on your project needs.

After you pick the emulators you want to use, then it will prompt you to pick the ports they’ll run on so that you can do something like localhost:4000 and open them in the browser.

Leave the defaults, unless you want to change them for something specific to your project or your way of building products.

How to use the Emulator UI

Now that everything is set up open the terminal again in your project’s root folder, and start the emulator using:

It will start your emulators and show you the emulators' information in the terminal, as shown in the picture below.

Once it’s running, you can open your browser and navigate to localhost:4000, remember, if you chose a different port when initializing the emulator, then use it here. 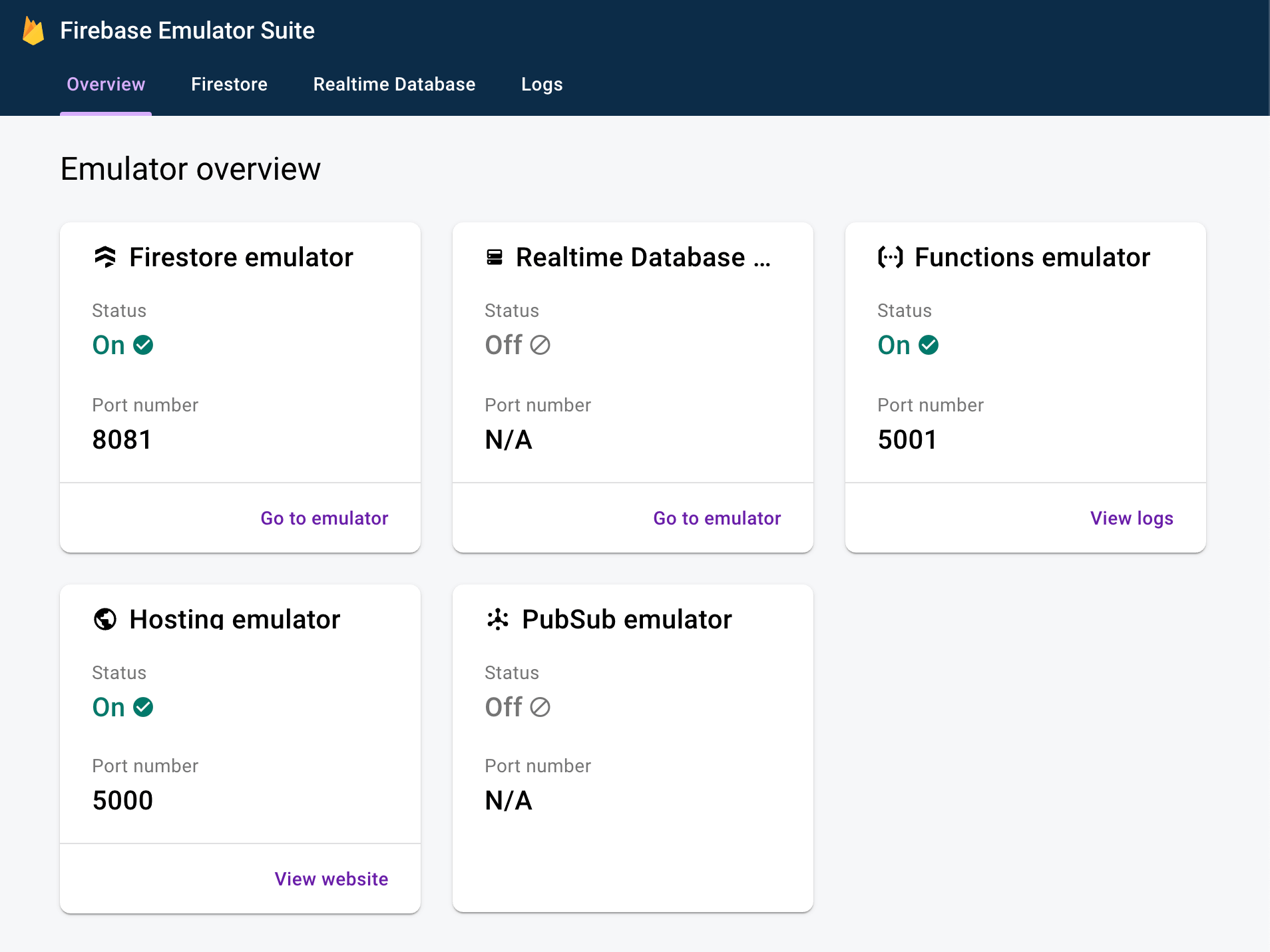 In the UI, you’ll be able to see a dashboard that shows you all your active emulators you have, you can click on any of them, and it will take you to the specific page for each one.

The Firestore emulator will show you a copy of your Firestore data as if you saw it in the Firebase Console (but it’s much faster than the online console). 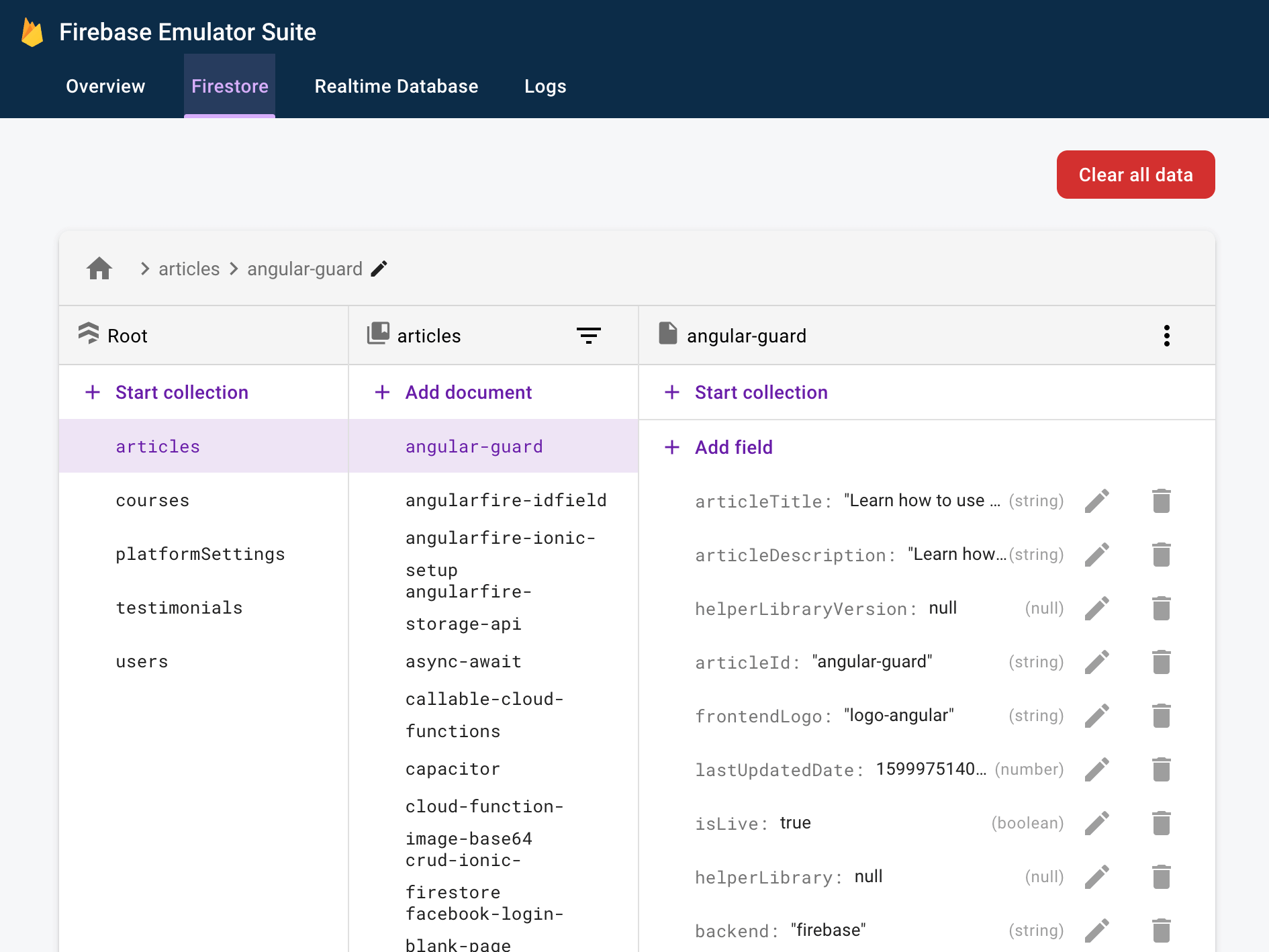 The Functions emulator will show the Cloud Functions logs.

And the hosting emulator will open your website locally. It will use the code in your public folder, the one you have set up in firebase.json.

Now that you have an overview of everything through the emulator UI, you can also test your functions locally. This will happen in two different ways.

For cloud functions that trigger with Firestore changes, the local functions will trigger automatically as soon as the Firestore emulator is also running.

For Cloud Functions that act as HTTP functions, then you need to change the function URL for the one that points to the local port you added at the beginning.

If you don’t remember the ports, you can always find them in firebase.json

To call the emulator one, you will change the domain to be:

For example, if my project’s ID is javebratt, and my cloud function’s name is addUser, then the online URL will look like this:

And the emulator (or local) URL would be:

Let Ionic know which Firestore instance to use

For our project, we’re using Ionic with the @ionic/angular package, and also @angular/fire as a helper library to interact with Firebase.

There is one configuration we need to add to our app so that when you run ionic serve or ng serve if interacts with the Firestore emulator instead of the online database.

First, you need to go to app.module.ts and find the firestore import. It looks like this:

Inside of it, you need to import firestore settings. In the end, it will look like this:

Once it’s imported, go into the providers array and add a new provider:

It’s going to ask our app, is there an emulator property in environment, and is it set to true? If it is, it’s telling our app that the Firestore host will be localhost:8081 and that we won’t use SSL (https).

Remember, we’re setting port 8081 there because that’s the one that the CLI added for us in the configuration when we ran the emulator init command, if it created a different port for you, then use that one.

If there’s no emulator property, or if it’s set to false it’ll be undefined and the app will use the standard Firestore configuration.

Once more thing, when you’re going to serve the application, don’t forget to open a separate terminal and run the emulators command:

Copy your online database to the emulator

One thing that bugs me is that the Firestore emulator starts with an empty database. It might be useful for you, but in my case, my app depends on data from the database, so if I start an empty emulator instance, then several things will be missing from my app.

One thing I found that works wonder is exporting my online database and importing it in the emulator. For this, I use the node-firestore-import-export package.

It has excellent documentation, but right now, you only need a couple of things.

It will download a JSON file that you need to keep private since it’s basically an admin key for your entire app.

Once you have the file, install the node export package, open your terminal and type:

Then, to download your entire database, you can run this command:

Once downloaded, you can import it into the Firestore emulator. For that, you need to have the emulator running, open a separate terminal window, and use the import command.

There are two things to take into consideration before importing it. First, let’s terminate the emulator instance in the terminal, and only start the firestore emulator:

We do this because if we import everything and we have cloud function listeners they will all trigger in that first import.

Then, we must tell the node package that we want to import to the emulator instead of the online database, for that, before running the import command, we must run in a different terminal window:

That will make sure we write to the emulator and not the online database.

Remember, we’re setting port 8081 there because that’s the one that the CLI added for us in the configuration when we ran the emulator init command, if it created a different port for you, then use that one.

Now we can run the import command:

Remember to change the name of the files according to how you downloaded them.

If you check the emulator UI now, your Firestore database should be populated. If not, and you see any issues, please let me know. I’m more than happy to help. 😊

Start your emulator with seed data

Once you added all the data to Firestore if you stop the emulator and start it again, it will start empty, so you’d have to run that set of commands every time.

Luckily, Firebase does have an option to back up our emulator, with the emulator running, and all the data already in Firestore, open a separate window and type the command:

It will create a folder called /emulators.backup in our project (you can change the name to whatever you want), where all the data lives.

Changing the name of the file to whatever you used in the export.

That’s it. Now you have a fully functional development environment that will let you both work faster and save money.

There is one drawback to this, and it’s indexing, Firestore emulator will let every query go through, so you might be using range queries and things that require indexes, and the emulator will let you do it without the index, but then production app will break because of the missing index (Already happened to me 😜).

While the team decides how to solve this, the one thing that I found helped me, was using the new preview_channels for Firebase hosting, and deploy the app to a testing channel, click around, and make sure nothing was broken.

Do let me know if this was helpful or if there’s something missing you’d like to know!

By the way, do you want to jump-start your development using the Firebase modular SDK with AngularFire?

Download my free book that will take you from creating an app to properly using Firebase Auth and Firestore.